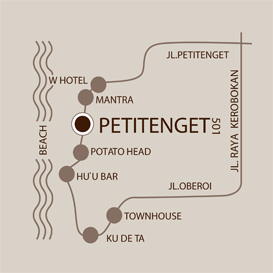 Petitenget is a small enclave within the Seminyak area, which in recent times has developed into the hippest, most fashionable district in all of Bali, with great restaurants, cafes, beach clubs, boutiques, art galleries and five star hotels to be found at every turn.

Petitenget Beach is just part of the huge swathe of sand and surf that runs from Jimbaran in the south all the way to Canggu in the north, and can be accessed just 300 metres from Petitenget 501. Sun loungers and umbrellas line the sands and can be rented from the local beach boys who will also keep you well watered with cold drinks as you swim and sunbathe the day away, before settling in for another of Bali's famous sunsets. If it's five-star treatment you want, then make your way to one of the glamorous beach clubs that line the beach such as Ku De Ta, Potato Head and W Hotel.

Come night time you are certainly in the centre of all the action with gourmet restaurants like Sarong, MerahPutih, Mantra and La Lucciola on the doorstep, and nightlife venues such as Hu'u Bar, Potato Head, Mint and WooBar where you can dance and drink the night away.

If it's culture you seek then you needn't look further than the nearby Pura Petitenget, one of Bali's most revered temples dating from the 16th century, and renown for its particularly spectacular beachside ceremonies.

Whatever you desire, it's all here in Petitenget, and all within walking distance!

Open the map
Close the map